Flatpak is a package format that bundles application together with their dependencies. Usually, the dependencies are shared libraries that the application requires, and which might not be installed on the system in exactly that version. This is a stone old problem, and flatpak (and Ubuntu’s snap) is an attempt to solve that problem - by letting the application bundle its dependencies. And isolate that inside a container-like world so it can restrict its access.

Anyway: vscode flatpak appears to bundle a version of cmake that cannot (at least) determine the googletest install. 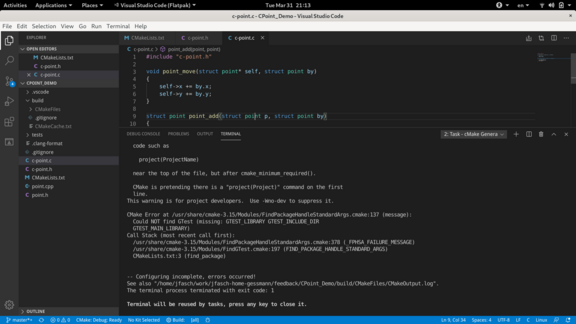 For those of us who don’t like screenshots so much (me I like copying the error message into the browser’s search field, and I hate screenshots), here’s a textual screenshot,

Hmm. Sigh. Bundling. I’d have liked to cram vscode into a jail, but no.

Use instructions from here, and it’ll work. Sigh.